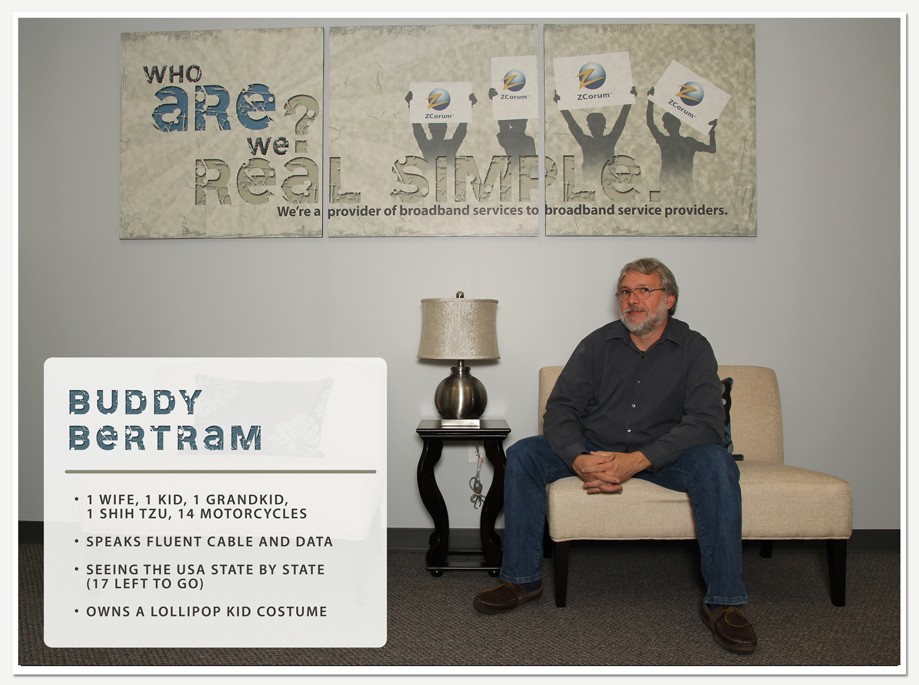 Dennis Bertram, known to everyone as “Buddy”, is one of a kind.

Born way up in the frozen north in Ohio, Buddy migrated to Pennsylvania at the tender age of eleven. In 2000, on Labor Day, Buddy decided to take his long weekend and move to Atlanta. And he’s still here. He says it’s because of our wonderful food and motorcycle trip proximity to both the mountains and the beach, but we know it’s because there’s no snow.

In his budding career days in 1988, Buddy only thought of cable as the bill he had to pay every month. But as he says, “Working twelve years with a bunch of cable guys kinda wears off on ya.” Before we were lucky enough to snag him, Buddy worked for nearly every department at Cablevision in Pennsylvania, where he wowed the old hand cable guys with his computer magic. His interaction with all the departments allowed him to get a greater understanding of how cable companies work and he learned how to establish order in a world of tech chaos.

These days Buddy can be found designing networks for ZCorum’s affiliates and keeping them running like well-oiled machines. He gets ZCorum’s affiliates excited about what could be and then finds ways to make it happen. He speaks fluent cable and IT and ensuring the customer receives the best for their money, whether it’s products, services or just plain old advice, is his holy grail. And don’t let that aww-shucks-maam demeanor fool you; Buddy is approachable and much, much smarter than he lets on.

Buddy’s lighthearted side involves marrying his wonderful wife in 1996 and all things motorcycling. He’s an active member in the Goldwing Road Riders Association, and he and his wife are the 2013 Couple of the Year for their chapter. They also won best chapter costumes in the Georgia District for dressing up as Wizard of OZ characters. Buddy was a Lollipop Kid. He isn’t that short but we’ve heard he can sing and dance in pointy shoes.

If you’d like to contact Buddy about speaking at an event, participating in an an article, or something else he might be able to help with, fill out the form below.
Page load link
Go to Top