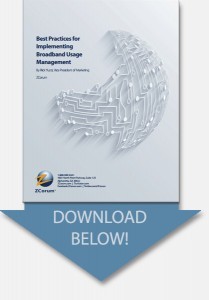 So, effective bandwidth usage management needs to take into account big events on the Internet that a lot of people may watch?

Hunt: Yes. Now the Super Bowl-type events and things like that are usually multi-cast sessions, so a lot of people are joining on to the same multi-cast which ultimately is not consuming that much bandwidth within the network. What does consume bandwidth, for example, is say Apple coming out with the latest update for the iPhone and everybody jumps on one minute apart. It’s a couple of gigabytes to download, and each user is starting up an individual unicast to be able to download the updates. Something like that can have a huge impact on the network.

Some providers will throttle users regardless of the time of day or month if they are using a lot of bandwidth. Is there a better way?

Hunt: Yes. Let’s take, for example, the typical family, mom and dad, two children, having multiple PCs or devices and one person is watching a movie and another is downloading files, yet another is listening to music. Individually, they are not consuming a huge amount of data, but collectively they are. During the day, it’s not really a problem because the pipe’s large, so you could let them use whatever they want. Let’s say they’re on the lowest tier package, their experience is satisfactory for them and they’re not impacting the other users in their area.

Now imagine that same family around 5 or 6 PM when everyone else in the area starts to come online. If you’re monitoring, you begin to see the growth and consumption of bandwidth within their service group. Looking at our sample family’s amount of bandwidth consumption, you realize that this particular household, compared to everyone else, is not within the normal range of consumption. As other subscribers begin to come online, the high consumption users, like our family, will start impacting their neighbors.

Now would be the opportune time, based on their collective usage during this peak time, to throttle them about 10%. Throttling the users isn’t going to have an impact on their ability to do what they’re doing. It may slow down some tasks a little, but the user experience is going to be close to what it was during the day. The difference is how this small amount of throttling will benefit everyone else in that service group. Overall, that small percentage, especially if you throttle 10% across the service group, can ultimately benefit everyone during heavy-use peak times.

As you said, you want to do any bandwidth management in a net neutral way. Would you do this across the board whether it was Bit Torrent or Netflix or something similar?

Hunt: Yes, you would want to do it across the board. FCC rules allow for bandwidth management if it is neutral, and not punitive against a particular application or Web site. So, whether someone is surfing the Web, downloading a file or watching a movie, they would see the same reduction in bandwidth. The good thing about most of the service slowdowns based around Netflix and similar services is that they are able to handle throttling. What will ultimately happen is that the application will realize it’s not getting as much bandwidth as before and basically, with Netflix for example, the picture quality will soften. In fact, even if there is plenty of bandwidth locally, if Netflix is overloaded, the same thing will happen.

And, there is another aspect to this peak/off-peak usage. It’s not as simple as designating evening hours as throttling hours and daytime as no holds barred. When an operator wants to optimize bandwidth usage and revenue; he wants to fill the down time or “empty” bandwidth time during the day and the best way to do this is with commercial customers. Commercial customers are primarily day users but collectively they can tie up a lot of bandwidth. Therefore day monitoring is also necessary to ensure those commercial customers are kept within their own data usage tier and not impacting residential customers and vice versa.

And commercial customers are going to be paying a higher rate for reliability and consistency, and you need to be able to provide that?

Hunt: Absolutely. You’re going to be selling them larger bandwidth packages, as well, and the satisfaction rate of these customers can really impact an operator’s revenue. So, it’s important that any bandwidth management system be able to handle differences between service groups, such as residential and commercial, and apply different policies based on packages that are purchased.

Let’s talk about the usage data and how it’s collected. For a cable provider, is IPDR the easiest way to collect usage since it’s a DOCSIS standard, and what about accuracy?

Hunt: That’s correct. IPDR pulls the data right from the CMTS, so it’s highly accurate in that regard. We used to use SNMP to track usage, but it is not as accurate because of how it is collected. For effective bandwidth management you have to collect usage real time with IPDR, and you can actually pull the data as often as you want (every hour, ten minutes, etc.). It depends on how close to real-time you want to get for service management. IPDR can collect a lot more information than SNMP.

Any thoughts on providing usage information to end users and the need for that to be accurate?

Hunt: If you’re going to apply bandwidth policies or charge for usage, I think it’s important for you to provide a way for customers to view their usage, and for that usage to be accurate. I think as you look at monitoring tools, Comcast is kind of the classic model right now. You can see how close to your limit you are, and you can go in there and check it whenever you want. It is a valuable tool.

Any thoughts on how providers should be charging for usage to recover some revenue?

Hunt: Obviously, it’s one of those situations where if you want to drive a luxury car, you pay for a luxury car. You can look at it as lanes on the freeway with the luxury cars getting the faster, wider lane to drive in. But you want to make sure everyone stays within their respective lanes.

Bandwidth has a cost to it. If you’re willing to pay for as much bandwidth as you need, (the luxury car), then the provider puts you in the fast lane. If a user doesn’t want to use a lot of bandwidth, but if you still want to get on the freeway at a reasonable speed, the provider slots that user into a different, lower cost lane.

With networks today, you can’t sell everybody a Rolls Royce. The network “fast lane” wouldn’t be large enough to keep up, using the freeway analogy. Conversely, you can’t have everyone in a VW Bug all in the same lane either. You want to sell everybody the speed that they want, while keeping up the consistency in the user experience with all of those speeds, especially at the peak time. The operator needs to ensure that at each level every customer is getting full quality for their money.

A lot of providers will price their tiers on speed, but even at 3 Megs being the lowest priced tier, that’s plenty fast enough to stream movies, etc. Couldn’t it be true that these users are using the most bandwidth?

Hunt: Absolutely. I work with an operator in Connecticut, and there is a guy, who’s in the 5 MB tier, and last month he downloaded 3.2 TBs, and he was in the lowest service tier.

So, because of that, it would be important to have usage quotas for people in the lower service tiers because everyone is going to gravitate toward that lowest price.

So, if a user wants to do HD streaming and cut the pay TV cord, he could do that with 3 Megs, and they’re going to kill your network.

Hunt: Yes and that’s when the trouble starts, because everyone else is impacted by that subscriber. That’s when you have to implement caps so you can throttle those users who are joyriding in the “luxury car” that they aren’t paying for.

Do you have an opinion on the pay-as-you- go service offerings? More specifically, where an operator could offer a higher level of bandwidth when it’s needed or some type of pre-pay system that when you’ve exhausted all of your bandwidth, there isn’t any more left?

Hunt: One thing I think you have to look at now is the level of complexity of the billing systems and being able to deal with that model. But yes, if someone could just put in a credit card and buy a certain capacity for a certain amount of time, I believe as a service provider, we’d have to be flexible to give them what they want when they want. Operators are going to have to start thinking about broadband differently since there are such big usage amounts.

A classic example would be a subscriber who is on the low tier all year and then the holidays come along and they buy the kids iPads and gaming systems, and they want to download everything all at once. Then, after that it calms down and kids go back to school, so they’re perfectly fine going back on the lowest tier because it’s all they need. So the pay as you go scenario would solve a lot of problems, not to mention earns extra revenue for the operator.

Don’t forget to download the white paper on Best Practices for Implementing Broadband Usage Management. Simply complete the below form and we will email you the white paper in PDF form.

We will never share your email address with any third parties.
[email-download download_id=”7″ contact_form_id=”14287″]

Have a question that you need answered about broadband? Ask a broadband expert and your question could be featured on our site next month. Ask your questions by filling out this form or in the comments section of this article.