Due to the insatiable appetite of subscribers for bandwidth services such as 4k and IP video, coupled with the exploding increase in WiFi, it has become almost mandatory for providers to offer gigabit speeds to homes and businesses. Operators scrambling to meet the demands have typically relied more and more on node splits.

Viewership analytics are nothing new. For years, operators have relied on simple  amounts to measure the most and least watched channel performance – particularly how busy a channel is during certain times of the day or week. Viewer counts were never very reliable, but it was the standard for the times. Now new data analytics tools have gone beyond the simple viewer counts in measuring TV channels and opened a much broader range of measurable data that will give operators clearer insight into their subscribers’ viewing habits.

Cable signal leakage, sometimes called egress, occurs when RF signals “leak out” from the cable plant and spread into the environment. Cable signal leaks can be caused by loose connectors, damaged plant cables or cracked or unterminated cables. And egress or leakage is an open invitation for ingress, when outside signals get into a coaxial cable causing a disruption in online and voice services, poor picture quality, tiling, and picture freezing. These lead to customer complaints and result in long hours of troubleshooting. But signal leakage also has other repercussions for the operator, the most serious being the increased liability due to “harmful” interference with aeronautical communication.

As operators we have many (sometimes too many) monitoring tools to gauge the health of our plant. This is especially true on upstream signals where we often find the most problems. The downstream, while typically a “cleaner” set of frequencies to transmit on, has challenges of its own and is much more difficult to monitor effectively because the signal is going to each customer location rather than straight to the head end.

On February 3, 2011, the Internet Assigned Numbers Authority (IANA) allocated the last five remaining “/8”s of IPv4 address space to the Regional Internet Registries (RIRs); the local registries are running low on IPv4 addresses, rapidly. The advent of new Internet-connected locations (from hotels to planes and more world-wide) and new Internet-connected devices (notable examples include smartphones, smart meters, gaming devices and other household appliances) has exacerbated the shortage. Each of these extra devices places greater pressure on the existing IPv4 infrastructure.

DOCSIS 3.1 and the PNM Toolbox

As cable networks transform, and services such as data, video, telephone, home monitoring and other services are going through them, the demand for exceptional reliability increases. To achieve such reliability the old break-fix routine also has to transform. Operators have to fix problems before they have an impact on service.

DOCSIS Evolution and How 3.1 Will Change Everything

The cable modem of the 1980s wasn‘t even called a cable modem. It was designed and used primarily by engineers and was just called a modem, or sometimes, an RF modem. The information was digital—1s and 0s—and these early cable modems were less complex and served limited purposes.

Voice communications remain essential to individuals and businesses. This presents a great opportunity for broadband service providers, who can offer an additional service over their broadband connection and gain some significant new revenue while they’re at it.

DHCP doesn’t just solve IP address  management problems, it can save you at the bank when it’s upgrade time. Want to know more? Read Scott’s answers to DHCP questions and find out the number one reason operators switch, why most telco or DSL operators may already be equipped to make the switch, and more.

Many broadband companies spend a good deal of time and money in an attempt to attract new subscribers. Of course, efforts focused on gaining new customers are an important tactic in growing your business. Just as important, however, is taking the steps necessary to reduce the loss of existing customers.

As its name suggestion, proactive network maintenance (PNM) allows cable operators to get ahead of the curve in being able to diagnose issues in the cable plant. When network impairments are concentrated in an area, it’s easier to locate the problems if technicians can zero in on multiple cable modems that are having the same problem and group those modems together.

The return path in any DOCSIS network is most frequently the weakest link of the DOCSIS network. It is the source of most RF impairments and also the location of RF ingress, which disrupts DOCSIS communication of any type. Why is this?

You probably already know that by adding a simple, one-line command in the CMTS you can see an immediate 5 to 10 dB improvement upstream MER (SNR). It’s like a magic pill that eliminates the pain that would normally be caused by impairments in your outside plan an the subscriber’s home.

A recent poll ranking the customer service of 235 companies across 19 industries found that cable and telco providers aren’t scoring so well with their customers. The bottom of the barrel in this survey is a who’s who of TV and Internet companies, with eleven of those companies landing between 222 to 235 in the rankings.

If you’re like most cable providers, it’s been a challenge to keep up with the increasing demand for bandwidth. As quickly as you add capacity, it seems you need more, and the cost of constantly bumping up your bandwidth probably isn’t being offset by an increase in revenue per subscriber. 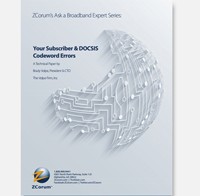 DOCSIS codeword errors are the most effective metric to determine if a data issue like slow web pages, slow gaming, poor voice quality, etc., is an RF plant problem or if it is a data network problem. Understanding codeword errors  and their effect on RF impairments will enable you to improve your subscriber’s experience, lower your costs and save your technicians time in the field.