YOU ARE HERE::Home/Press Releases/ZCorum Awarded Business of Excellence Distinction for Sixth Consecutive Year
Previous Next 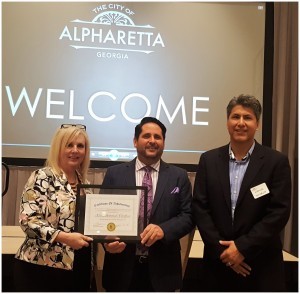 The event, which is sponsored by the City of Alpharetta and the Mayor’s office, honors an elite group of businesses in the city that have distinguished themselves by winning an award in the previous year from local or national organizations. This year the event included special recognition of the businesses that have achieved the Business of Excellence designation for sixth consecutive years, every year since the award’s inception. The city awarded ZCorum a special six year certificate and a limited edition Six Year Challenge Coin to commemorate the occasion.

The annual ceremony in March recognizes successful Alpharetta companies, which are given “Businesses of Excellence” distinction to show the City of Alpharetta’s appreciation for leaders in their respective industries who are going above and beyond business as usual. The event was held March 29, 2018 at The Hotel at Avalon in Alpharetta and attended by local businesses, the Mayor and other City representatives. During his keynote, Mayor Pro Tem Donald Mitchel congratulated the awarded businesses and encouraged everyone to continue the “excellence” that is leading Alpharetta into the future.

Julie Compann, President and CEO of ZCorum, was on hand to receive the award along with Carlos Bustamante, Vice President of Strategic Technologies. “We are so pleased that ZCorum has again been recognized for our commitment to business excellence,” said Compann. “Being honored multiple times is a great accomplishment and a direct outcome of our ongoing commitment to stay at the forefront of our industry. We are excited to play a part in Alpharetta being the Technology City of the South and to be recognized in the company of other businesses from the Alpharetta Community.”