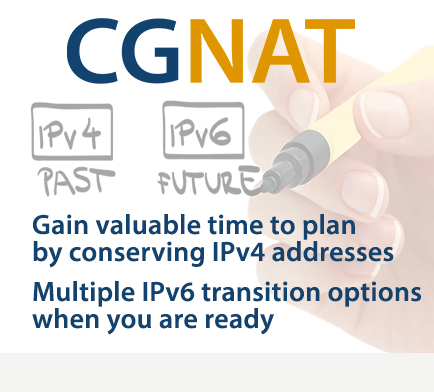 Yes. The American Registry for Internet Numbers (ARIN) stopped the general allocation of IPv4 addresses on September 24, 2015. In order to sustain current users and any future growth, migrating to IPv6 is inevitable for service providers. In addition to the exhaustion of the IPv4 address space, the emerging trend of the Internet of Things (IoT) is expected to cause the number of connected devices to cross 20 billion by the end of this decade, increasing the demand for even more IP addresses.

How many IPv6 addresses are there compared to IPv4?

IPv4 addresses are in a 32 bit format, which means there are approximately 4.3 billion IPv4 addresses. That sounded like a lot when the protocol was first developed in the 1970s, but with over 7 billion people in the world, and an influx of new IP-enabled devices, it is not nearly enough for the future.

By contrast, IPv6 addresses are in a 128 bit format. This allows for 340 undecillion numbers. How many is that? It’s 340 followed by 36 zeros. That’s enough to give an IP address to every atom on the surface of the earth and still have enough left over for 100 more earths.

Can I skip CGNAT and just go straight to IPv6?

Yes, but only if you have enough IPv4 addresses to get you to the point when there is no IPv4 content left on the Internet. We don’t know when that will be. It could be five to ten years. Since IPv6 is not backward compatible with IPv4, service providers must have a way for their customers to reach content hosted on networks that have not yet made the transition to IPv6. If you switch to IPv6 before all IPv4 content is gone you will still need to run your network in “dual-stack” mode, which still requires that you give every subscriber an IPv4 address in addition to an IPv6 address. Or, you can implement IPv6 only and use CGNAT to translate between your IPv6 network and IPv4 content on the Internet. Either way, if you start to run short on IPv4 addresses your only options are to buy more IPv4 addresses from a broker at market prices, or implement CGNAT, which will greatly extend the life of your IPv4 address space.

When will there be no more IPv4 content on the Internet?

We don’t know. There are a lot of stand-alone servers and hosting providers out there, and there is no set date when they must migrate to IPv6. There is also no pressure for them to do so. The pressure is on the service provider to make sure that their subscribers can get to all content on the Internet, whether it is IPv4 content or IPv6 content. It may be five or ten years or more before all content providers finally make the move to IPv6. In the meantime, if your customers cannot get to any remaining IPv4 content they will blame you, not the content provider.

How does CGNAT solve the IPv4 shortage and the need to eventually move to IPv6?

Also, networks often require different transition technologies to be deployed simultaneously. These solutions allow you to deploy each transition technology concurrently. For example, you could start with CGNAT to immediately mitigate IPv4 address exhaustion, and then phase in NAT64/DNS64 to enable IPv6 clients to access the IPv4 Internet when you are ready.

How many subscribers can use one IPv4 address with Carrier Grade NAT?

CGNAT will easily support an allocation ratio of up to 128:1, where each IPv4 address can be used by up to 128 subscribers. So, with that ratio you can support over 32,000 subscribers with only one Class-C IPv4 IP assignment, which is 256 IPv4 addresses.

Will my customers see any impact when I deploy a CGNAT solution?

No. Our Carrier Grade NAT solutions can support up to 256 million concurrent sessions. Also, unlike some NAT deployments, our CGNAT solutions include application level gateways that ensure applications like VoIP, Skype, and online gaming will keep working for your subscribers.

What about requests from law enforcement?

Some NAT solutions make it very challenging to find out who was using an IP address at any given time. Our solutions eliminate the need to search large address translation logs that could contain terabytes of data, making it much easier to respond to law enforcement requests.

How does the cost of your CGNAT solutions compare to other IPv6 solutions?

CGNAT and IPv4/ IPv6 translations is a resource intensive process and requires dedicated, high-performance hardware as part of the basic architecture. Payload inspection, protocol-aware gateways and IPv4 to IPv6 transition techniques put a strain on CPU and memory resources on traditional router products. Our CGNAT software is designed to provide only Carrier Grade NAT functionality, so it is significantly more efficient and consumes much less power and cooling when compared to traditional IP router-based CGNAT solutions. And, our software can be deployed on off-the-shelf hardware, which is significantly less expensive and more flexible than CGNAT solutions deployed on proprietary hardware. You can start with CGNAT to immediately mitigate IPv4 address exhaustion and then phase in NAT64/DNS64 to enable IPv6 devices to access the IPv4-based Internet.

How does IPv6 help?

IPv6 removes the IP address scarcity by creating a new address space with vastly more potential addresses. IPv6 also provides many other benefits to service providers and end-users, such as improved efficiency, security, simplicity and Quality of Service (QoS), which IPv4 doesn’t have.

What Carrier Grade features are built into your solutions?

You deploy our CGNAT solution on standard hardware, which can be designed to be highly redundant and used in an Active – Standby pair for high availability. We highly recommend deploying redundant boxes. When deployed in high-availability pairs, if a link is cut there is an immediate failover from one device to the other.

Will this give me IPv6 Addresses?

No. The American Registry for Internet Numbers (ARIN) is the location for requesting IPv6 addresses. But, our CGNAT solution provides options for transitioning to IPv6 so that you can roll-out IPv6 on your network when you are ready and CGNAT will do the translation so your subscribers can still reach IPv4-onluy content. You can click the link above and follow the process steps including how to determine how much IPv6 address space you need.

Like or follow us for free industry resources and for the newest updates on CGN and IPv6 solutions.