Ask a Broadband Expert – The Advantages of Network Virtualization

YOU ARE HERE::Home/Ask an Expert/Ask a Broadband Expert – The Advantages of Network Virtualization
Previous Next

Ask a Broadband Expert – The Advantages of Network Virtualization

The Advantages of Network Virtualization 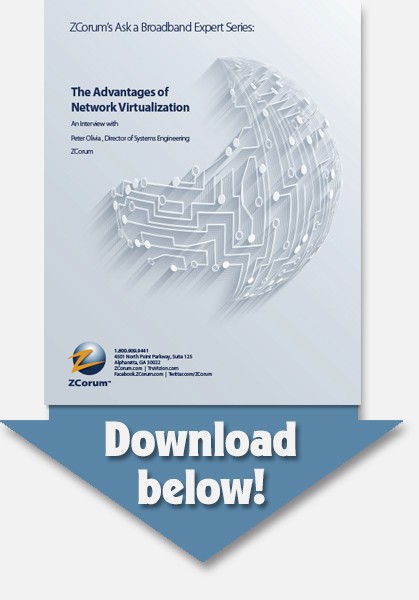 Peter Olivia is the Director of Systems Engineering for ZCorum and joined the company in 2011. An honors graduate of the University of Florida, Pete resides with his family in Marietta, Georgia.

We sat down with Pete to discuss network virtualization and how it applies to broadband operators. We asked him to shed some light on some of the issues with operators implementing this and how they can determine if it’s a good fit for them or not.

ZCorum: How did virtualization become the “new way” for networks?

Pete: What initially lead people to virtualization was trying to provide space for more hardware as their networks grew. They had bought all this equipment upfront that was taking up a lot of space. Every time they needed to add a new application or service they had to make room for more hardware. Short of adding a room on to their building or something, they began to think about other options. The reality was all this hardware they currently had was just sitting there and 90% of it was being under utilized.

There was a lot of wasted space on the boxes. From that came the concept of “what if I put 10 applications on one box instead of buying nine more boxes.” And it worked. Now their capital outlay for hardware was reduced to 1/10th of the cost from the original model of doing things. Those extra resources could then be shared across other environments. Since an application is simply processing power, memory, and some code, you could move hardware in and out and it wouldn’t matter.

ZCorum: Who should consider virtualizing their network?

Pete: First off, anyone that has old physical network gear. The model used to be that everyone had to buy their own hardware every time they wanted to run a new or different system or application. And they had to consider the questions of; how available does the hardware need to be, does it need to hold power, does it need redundant drives, etc. Not to mention the cost, complexity, and time to make that all happen. Second, if that hardware dies they have to replace it, and if new hardware wasn’t readily available they’d have down time. That would mean unhappy subscribers.

Virtualization changed all that. The type of hardware doesn’t matter so much anymore. In virtualization servers can be moved around, even multiple times in a day, while it’s still running without anyone noticing. Virtualization allows you do build one set of resources as a general template and make that highly available for cloning or duplicating in order to aid in upgrading, troubleshooting and testing without down time.

Simply complete the form below to view the interview.

We will never share your email address with any third parties.

Have a question that you need answered about broadband? Ask a broadband expert and your question could be featured on our site next month. Ask your questions by filling out this form or in the comments section of this article.